Dog behaviour therapy of a streetdog: a mystery to be solved

Behaviour therapy cases are often a mystery to be solved. We get a very detailed history from the owners, we have a long conversation with them and ask tons of questions, we test and observe the dog. And then a picture can form. Take this one whom I saw recently.

This adorable young man was adopted from abroad. His owners are devoted and strict to just the right degree. But, for some reason, he lunges at (some) other dogs. He is also REALLY nervous in the city and then just ‘flips’. He’s been in the Netherlands for years and it doesn’t seem to be improving, on the contrary. What could be happening? 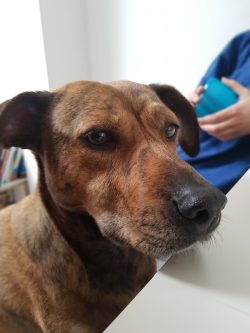 After a long conversation with his owners, and after studying their behaviour history form, it became clearer:
– Raised on the street so hypercompetitive environment
– Not systematically socialized to other dogs
– Bullied by other dogs at a critical age as a pup
– Not systematically habituated to city sounds
– Impoverished puppy time in that shelter, so tendency for getting over-stimulated easily (in the city, but also in play)
– Clumsy social skills with other dogs
– Chastised for growling at other dogs, so going straight to lunging

Once you have an idea of what could be contributing to the problem, you can then make a custom-made training and management plan to address these problems.