Do As I Do: the cutest & most scientifically interesting dog training method

“Do As I Do”, a.k.a. DAID, was discovered by ethologist and dog trainer Claudia Fugazza. 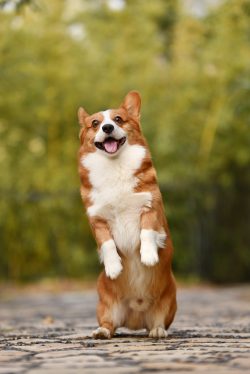 With this method, you demonstrate a particular behaviour to your dog and you then ask him to repeat what you did. As long as the dog is physically capable of doing it, it really doesn’t matter what it is you ask the dog to do, he’ll copy it when you ask. When the dog gets it, you can teach him tons of new things in no time, just by showing him.

On this video, you can see Django, together with Laure-Anne, demonstrate Do As I Do. Is he the cutest or what?

How do you teach it?

I want to stress ‘when your dog gets it,’ because that bit of ‘metatraining’ can take quite a bit of patience, understanding, perseverance and insight. This video shows you how to lay the ground work.

In short, you need to do the following:

Have a refresher training session with 3 exercises that your dog can easily do on cue. Pick behaviour that you, as a human, can carry out in a comparable way, to give the dog a chance to see a connection between what you do and what he then does.

The exercises used by the trainer on that video are:

Demonstrate, but still use the original (command) cue

Now ask your dog to wait and observe your behaviour (‘hold’), then demonstrate the behaviour (e.g. grab the Kong in your hand). You then say ‘copy’ (which means ‘do it’ in this context), and then, shortly after, say the original cue that the dog is familiar with (e.g. ‘Kong’).

In time, the dog will start getting the inkling that, when you say ‘hold, you’ll do something interesting and that you’ll then give him a familiar cue to do something which kind of looks like what you were doing. This is how it looks in your dog’s mind:

You can repeat this same chain of events with the other two exercises, being sure to frequently alternate between the exercises so that the dog gets a chance to see a pattern (to get the fact that ‘hold’ and ‘copy’ always feature, regardless of the exercise).

Once you’ve done the above a million and a half times, you can start waiting longer and longer between saying ‘Copy’ and giving the specific cue (e.g. ‘Kong’). This gives the dog a chance to try to work it out.

After a while, you won’t even have to say ‘Kong’ after you’ve demonstrated. And THAT’s the point you’re trying to reach.

It is important that you keep switching between the 3 known exercises in this session, otherwise, the dog will just think that you grabbing the Kong is just another cue for ‘Kong’, rather than an invitation to observe and repeat.

Now you can start very carefully with new tricks which he’s never seen before. If you’ve been careful, you should get to a point that he now can carry out these tricks purely on the basis of your demonstration. This is not going to happen in two days, but the results are so nice and you can get up to hilarious stuff with your dog. Look at this video!

The ethology of DAID

DAID is also scientifically quite interesting. Imitation is a core concept in ethology (the science of animal behavior) and there are a lot of discussions about what it precisely means. The purest form of imitation is an animal who can, purely om the basis of a demonstration, carry out an otherwise unlikely behaviour without purpose. Other scientists define imitation as also requiring insight into the intrinsic goal of the behaviour. With this definition of imitation, few are the species other than human beings who can achieve it.

Other forms of learning which can look like imitation, but aren’t quite there, are, among others:

Ethologists have held DAID under scientific scrutiny to try to pry apart the various things that influence it and to try to establish whether DAID in fact IS evidence of pure imitation in a non-human species. It is giving rise to very interesting discussions in ethology!

So not only is DAID really nice by itself, but it is also scientifically interesting.

Do As I Do course in The Hague

Check our Beyond Obedience calendar to see when OhMyDog is giving the next Do As I Do course!

(Choose Beyond Obedience as the course you are registering for, and write Do As I Do  as your objectives)

Standing corgi: Downloaded from PxFuel (Terms of Use). No modifications made.