Written by Laure-Anne Viselé-Jonkman
February 5, 2021
Photo credits at the end of this post

I attended a fascinating webinar about Post Traumatic Stress in dogs last night. As a dog behaviourist, it gave me much food for thought. You can find the points that I found particularly worthy, and a little analysis, below. Beware, though: I wrote this in my own words, and it is my take on it. I may also not have understood/interpreted certain points perfectly.

The webinar was given by Dr Franklin McMillan. Dr McMillan is a veterinarian and scientist who specializes in animal welfare, and especially in trauma and dogs. He has founded Best Friends, a centre where special-needs animals are rescued and, where possible, rehabilitated. His research interests mainly focus on trauma in dogs. During the webinar, he went through his and others’ studies (and daily findings) about traumatized dogs. If you are interested in trauma in dogs (specifically through rehoming, abuse, work conditions, etc.), definitely look up his research.

In human psychiatry, there is an official distinction between a PTSD diagnosis (Post Traumatic Stress Disorder) and PTS (Post Traumatic Stress). In reality, PTS is a spectrum within which you find PTSD. They are not distinct diagnoses. On the PTS spectrum, you will find, on the one hand, milder/more temporary problems and, on the other hand, more extreme and long-lasting impairments (the PTSD end). 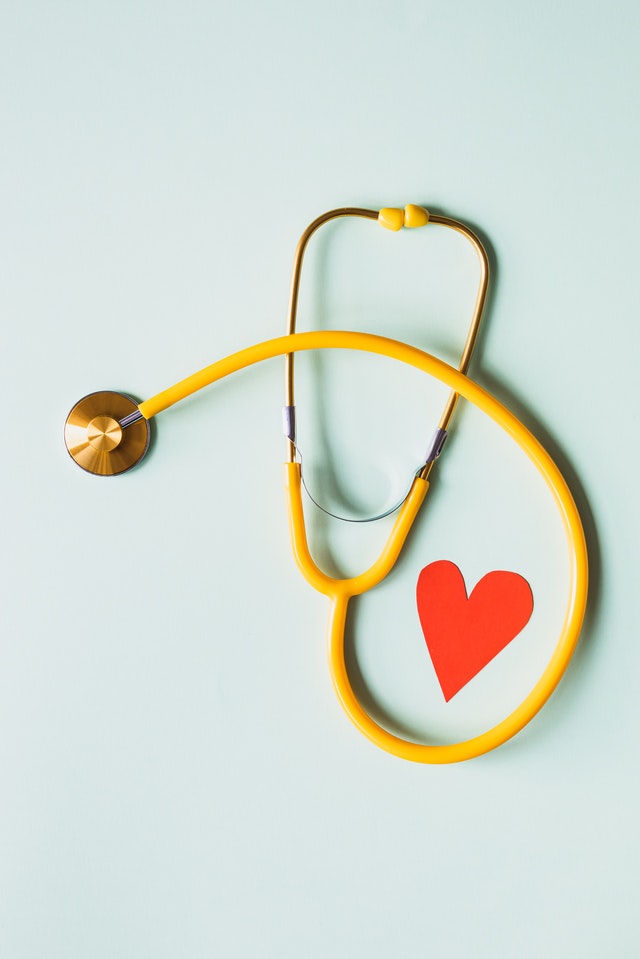 I can find the same distinction without a difference in my behavioral therapy practice (for dogs). At some point, it doesn’t really matter what the exact diagnosis is and whether the dog’s symptoms qualify him/her for an official diagnosis. It’s all about the dog’s quality of life and making the right treatment choices

Traumatised animals can’t talk so: 1/ you may miss some symptoms (e.g. intrusive recall of the traumatic event) and 2/ you might not find out the cause of the trauma.

Interesting: we want to be careful not to jump to conclusions with non-verbal patients:

As a dog behavior therapist, I also don’t lose too much sleep in pin-pointing the exact root cause(s) of a problem. To me, it’s all about whether the dog needs help. You can’t let not knowing the exact cause get in the way of making the right treatment choice, particularly when this information is often not accessible.

Possible reactions after a traumatic event

A traumatic event can result in:

As a dog behaviour therapist, I actually see GAD being over-diagnosed, and PTSD is under-diagnosed. That was the reason I was interested in this seminar in the first place. In my view, people hardly ever stop to consider that dogs too can get traumatised, particularly if they have been repeatedly rehomed, if they used to live on the street or if they have come out of a shelter

These are the human symptoms (as they appear in the DSM-V):

I do recognize a lot of these symptoms in my practice. One that particularly sticks me, from that list, is the ‘out-of-blue aggression’ (for which we have found no medical reason). – Point 4 (intrusive memories) is a tough one to establish with any certainty in animals. – Restless behaviour (without a clear environmental reason) is also something that I often come across.

Dr. McMillan urges for caution with diagnosing dogs with PTSS. He prefers to stick with a PTS label, rather than pinning them down to the most extreme form on the spectrum (PTSD).

An interesting point was raised during the question round: what of the silent sufferers? Do they get under-diagnosed for PTS? Think of the shy and retiring dog in the shelter. Are they actually shy or are they shutting down as a coping mechanism for their trauma? Unfortunately, because their symptoms are less conspicuous, these dogs often do not get the help they need.

Causes of trauma in dogs

Some of the case studies he shared with us were too depressing for words. Take this dog who, as a punishment, was forced to stay outside on a chain during violent storms. Let me clarify: the owners would wait for a good storm to come and then, ON PURPOSE, chain the dog outside. What could possibly possess someone to do such a thing to a dog?

Dr McMillan has classified trauma causes in neat categories, including the usual suspects (abuse/neglect) but also social isolation (e.g. shelter dogs, puppy mill sire/dame dogs) and frequent rehoming. Some causes of trauma also occurred unintentionally (e.g. a dog falling through the ice, getting hit by a car or witnessing an earthquake).

We do not often think of rehoming as a potential cause of trauma in our line of work, and this is something that bears considering.

And then, of course, you have the working dogs. He clarified that not every working dog has a poor quality of life but it is undeniable that the working (and, importantly, living!) conditions of certain dogs can absolutely lead to trauma. 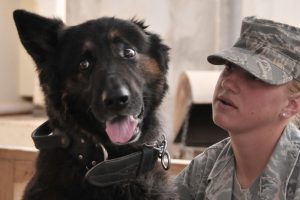 He compared studies in the quality of life of working dogs in different areas. These are the interesting snippets that stood out for me: a family dog appears more likely to make spontaneous recovery than a military dog (who seems seem less likely to recover without structured/targetted treatment). SAR (Search-and-Rescue) dogs were also found to relatively seldom suffer from long-term problems, especially when compared to traumatised military dogs.

He made an important distinction between forced work and non-forced work. A (good) working dog organization will remove the dogs from the programme if he/she does not enjoy the work. This is not necessarily the case in forced work environments like sleigh dogs, fighting dogs or lab dogs.

Individual dogs, like individual humans, differ in how they cope with stress. One dog will be more resilient than the other. Some dogs, for example, seem to benefit from spending the night in the home of a volunteer, whereas others appear to come back from these overnight stays even more shut-down.

I can observe these enormous differences in resilience in my practice too: For example, two Swiss White shepherds with the same breeder/father and mother and with the same owners. One turned out a nervous wreck while his brother is a happy-go-lucky goofball. I also often help owners with dogs who were imported from Eastern Europe. These dogs have been through a lot. And yet some seem to be able to take it in their stride and instantly adapt to their new life as a family dog, while others have enormous difficulties.

He posited that snapping might potentially belong to the PTSD syndrome.

In the news, you often read about captive animals who have snapped: orcas, chimps, tigers who maul their trainer /caretaker ‘out of the blue’. Snapping happens when an animal is pushed so far that, even though they had never shown aggression before, they suddenly attack their caretaker. Unfortunately, we have little opportunity to study these animals as almost all of them are immediately euthanized.

Dog behaviour therapists would do well to take a moment to think about snapping. Many of my clients gravitate toward a heavy-handed parenting style, whilst that is the last thing you want, particularly with a traumatised dog. The clients take it for granted that their dog will accept this treatment for years, leading to extremely unsafe situations.

Social company and control about (aspects of) their own life are two big buffers that we can use to help a patient.
How can you increase a dog’s sense of control? You could give them a safe haven. Do note that some dogs will permanently hide away, given a chance. So we are talking about giving ‘controlled’ control, not unlimited control. 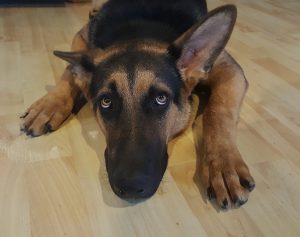 Your main goal has to be to give the dog his or her sense of safety and confidence in animals/people/the world back. e.g. convincing a dog who has experienced an earthquake that the house is not about to collapse again.

Treatment comes in peaks and troughs, with the dog even getting worse at times, even when you do everything perfectly.

This is such a difficult point in our profession. It won’t be smooth sailing for even the most compliant clients, never mind the more common kind of clients. This to me confirms the importance of aftercare: to stay in touch with your client after giving them the treatment plan and advice.

The treatment for military dogs, interestingly, has a lot in common with the types of therapy plans I draw up for family dogs:

It was interesting to see that, whether the trauma arose from work or in the family, trauma is trauma is trauma. And, that, broadly speaking, it is treated in the same way.

A traumatized animal (+ human!) will never be the same again. They will remain vulnerable to the problem situations.
So what is recovery, then? An animal who can take pleasure in his or her life again, and who can engage in positive social relationships again. Most importantly, it is an animal who trusts that the world is no longer something he or she should be afraid of.

This was such a nice point to think about, particularly for my behavioral therapy patients: no, he/she will probably never be the same again but you can achieve so much even with this imperfect outcome: you can help him/her be as happy as possible.